The National Democratic Congress (NDC) has suspended a member of its communications team, Stephen Atubiga, for “indiscipline”.

“At its meeting on Wednesday 18 March, the Functional Executive Committee (FEC) reviewed its decision on your conduct pursuant to the profuse apologies and pledges you made to be of good conduct for a period of six months following your meeting with FEC on 24 February 2021,” the letter says.

“You would recall that FEC summoned you to a meeting in respect of a news item attributed to you and published on Ghanaweb on Saturday 13 February, 2021 captioned ‘Only Useless Politicians Retire Poor’. In the said publication you made disparaging and unfounded comments about key senior members including Honourable Joshua Alabi,” says the letter, dated Tuesday 23 March 2021 and signed by the NDC general secretary, Johnson Asiedu Nketiah.

It added: “You are therefore by this letter to take note and notice is hereby given that your membership of the NDC is suspended, pending the hearing and final determination by the National Disciplinary Committee.”

The suspension of Stephen Atubiga comes less than 24 hours after the party announced that it has expelled its former regional chairman, Allotey Jacobs. 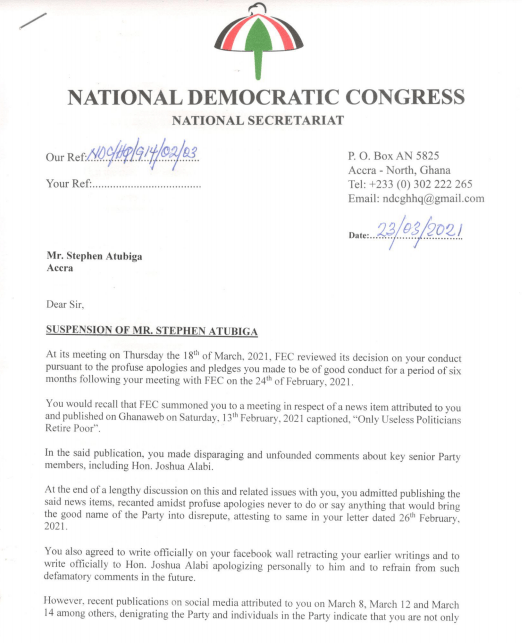 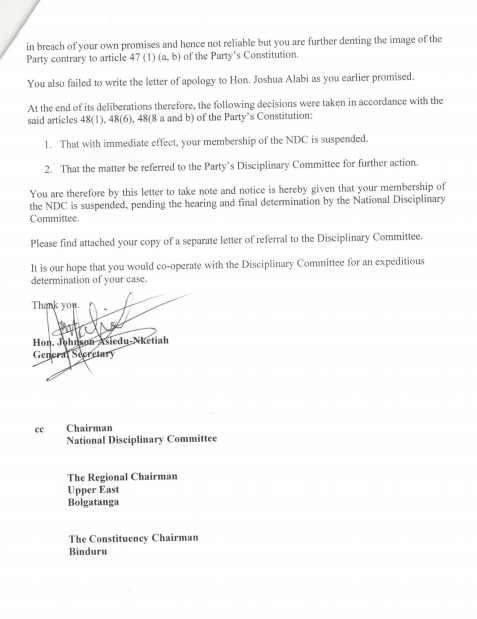 Political Parties in Ghana commit to peaceful elections ahead of 2024