The Inspector-General of Police (IGP), James Oppong-Boanuh has instructed commanders and other supervisors within the service to attach much seriousness to concerns lodged by personnel under their jurisdictions.

This, according to the IGP, is to help prioritize the wellbeing of personnel under the various commands as they discharge their duties.

His comments follow three cases of alleged suicide committed by some police officers within three weeks.

Speaking at the opening ceremony of a Policing and Psychological Well-Being Workshop for Senior Police Officers in Accra and Tema, the IGP said his outfit has committed enough resources to improve the welfare of personnel.

“When officers don’t get an avenue for their grievances, some resort to suicide. We must note that there are different levels officers can take the stress. We have very young officers among us, so we must take our time and listen to them. Their concerns must be your priority. That’s why there are welfare meetings. So listen to them and if you can’t solve it, push it to us, so we see what we can do.”

A 50-year-old police officer with the Ashiaman Court Unit, DSP Asiam Divine Yao, a police constable with the National Protection Unit, Eugene Yelnona, and the Police Commander for Half Assini in the Western Region, Superintendent Cyprian Zenge all died similarly in a manner suspected to be suicide.

The IGP who is very much concerned expressed regret at the rate of these unfortunate developments.

He thus assured of plans by the police service to adopt measures to avert similar occurrences in the future.

“Recent happenings of junior and senior police officers committing suicide are very regrettable. This is a concern of the administration. We need to find a solution to it. Police Commanders must take this cautiously as superiors, so they do not fall victims to the challenges we want to overcome”.

In the meantime, “very soon, all the regions will have their fair share of trained medical psychologists”, the IGP added.

COVID-19 Vaccination: Teacher unions plead with members to get vaccinated 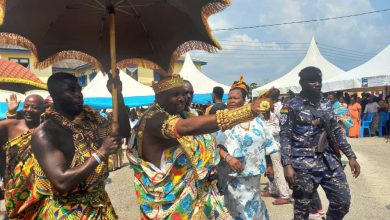