The leadership of the retrenched Ghana railway workers have offered an unqualified apology to the Minister of Railways Development and Member of Parliament (MP) for Essikado-Ketan Constituency, Hon. Joe Ghartey, for wrongfully tarnishing his hard-won reputation.

It would be recalled that in the run-up to the December 7, 2020, general elections, the retrenched workers had taken to the media particularly radio to maliciously claim that Hon. Ghartey, a former Attorney General and Minister of Justice and one of Ghana’s highly respected lawmaker, had taken their severance package and refusing to pay them.

According to them, the Government of Ghana had prior to the elections paid their monies to Hon. Ghartey but he was deliberately refusing to pay them.

But that turned out to be a complete falsehood as the laws of Ghana does not even allow payments of such monies to be made personally to any Minister.

Realizing the unfortunate reputation damage they have caused the Minister for no fault of his, the leadership of the October 1, 2006, retrenched railway workers on Thursday, December 24, 2020, visited Hon. Ghartey at his private residence in Essikado to seek his forgiveness.

The retrenched workers were led by their Secretary, Edward Roberts, in embarking on the apology mission after months of churning out falsehoods against Hon. Ghartey who has the course of his 30 years political career behaved very well in public and private life.

“As a result of plight, where we were living in a state of distress and pain, we allowed ourselves to be misinformed that our expected money from Government had been received alongside support to our existing Railway Workers. After a while, that we were not hearing anything from any quarters on the said money, we resorted to radio station interviews and along the line, made a certain unpalatable statement about you which was later found out to be untrue,” they said.

“In view of this, we render our unqualified apologies to you on behalf of all of us and deeply regret any inconvenience our actions might have caused you as a person and as a Minister.”

Prior to their visit, they had written an apology letter to Hon. Ghartey on December 17, 2020.

In the letter jointly signed by their Chairman, John Kodwo Appiah, and Secretary, Edward K. Roberts, the retrenched railway staff said “we render our unqualified apologies to you on behalf of all of us (retrenched staff) and deeply regret any inconvenience our actions might have caused you as a person and as a Minister.

Being a God-fearing person, Hon. Ghartey accepted their apologies and expressed his forgiveness for their wrongs against him.

However, he seized the opportunity to highlight that though the apology was appropriate, the effect that ‘propaganda’ had on his political fortunes was dire.

He shared that a larger portion of the Constituency who are a predominantly retired staff of the company was swayed by the misinformation.

“Of course it affected the course of the elections. Some people saw it as ‘enemy action’, a deliberate action that was promoted by the NDC. Even if it wasn’t by them, and was a coincidence, it was a happy coincidence for them because they could go to the people and persuade them that their monies were with me and I don’t want to pay. And Railway is a big constituency on my constituency. I tell you. Look at Kojokrom, Ketan, BU…railway workers and pensioners, and their relatives are all over these communities. You could see clearly that my votes in those communities were affected by this.”

In 2006, the Government of Ghana undertook a retrenchment Programme which allowed some railway workers to go on retrenchment

As part of the retrenchment package, they were supposed to be paid some amount of money.

During the former President John Agyekum Kufuor’s Government, the retrenched workers were paid half of the money due them.

And during the Mills/Mahama’s administration, they were paid the remainder of that amount of money owed them.

But the retrenched workers went to court, arguing that the calculation they did in 2006 was wrong and that they were owed additional money.

The High Court at the time agreed with the retrenched workers.

After the case was struck out by the Appeals Court, the Ghana Railways Company reapplied to have it enlisted, thus the matter is still before the court.

As such, no payment whatsoever has been made by the government to Hon. Ghartey.

Unfortunately, about three months ago, there was malicious media publications claiming that the government had paid the money for the retrenched workers and was being kept by Hon. Ghartey.

The publications went on to suggest that the Minister had refused to pay the retrenched workers their severance package even though Government had released it to him, something which completely false.

The laws of Ghana does not allow a Minister of State to directly or personally receive payments for Government workers and pay same to the workers on his or her own.

But the malicious publications to some extent could have influenced the outcomes of the Parliamentary elections in some areas of the Essikado-Ketan Constituency in the Western Region which is a major railway Centre.

So many of the residents in some areas like Kojokrom in the Essikado-Ketan Constituency, have their parents and grandparents being railway workers or former railway workers and thus issues of the railway are not taken for granted in the area. 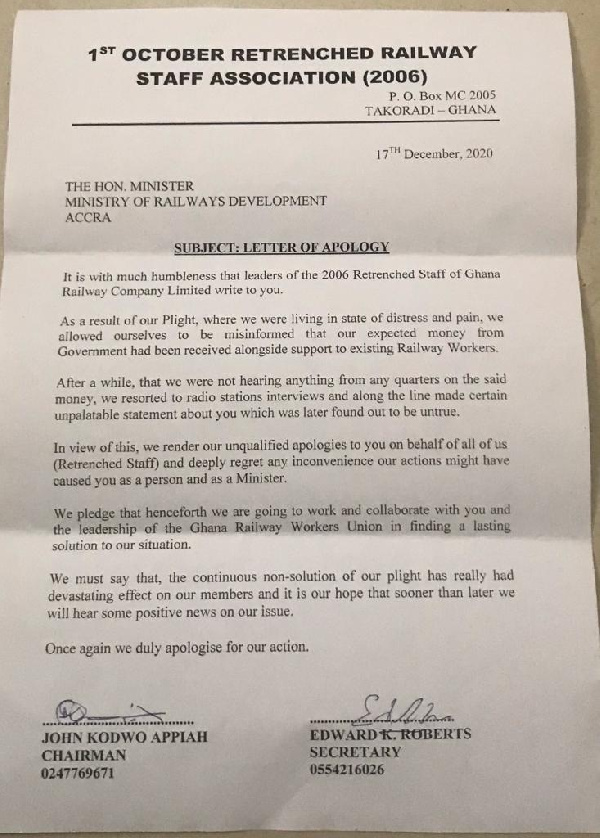 Hearts of Oak Supporters Give Kosta Papić A New Name