Facebook Twitter LinkedIn Tumblr Pinterest Reddit VKontakte Odnoklassniki Pocket
The Ghana Chinese Chamber of Commerce has expressed concern about the occupation of the Big Stone Mining – Company Limited, a wholly-owned Chinese company operating at Bogoso in the Western Region, by a group of policemen.

Describing the takeover as shocking, the Chamber said the occupation and driving away of the workers by the policemen when there was a pending legal matter over the shareholding of the company, flies in the face of the laws of Ghana.

The Chamber accused the plaintiff in a legal battle over the shareholding of the company, Wan Shanghong, alias Magee, of using her political connection with some elements at the Jubilee House and colluding with the police to occupy the factory, a development that is causing the company huge financial losses.

Consequently, the Chamber has in a letter to the Attorney General and Minister of Justice, called for action to restore normalcy.

Dated August 30, 2022, and signed by the President of the Chamber, Tang Hong, the Chamber stated: “ The local judicial system should protect the basic rights of our Chinese companies and the personal safety of Chinese employees as well as the employment needs of the local employees.”

“We hope that the Ministry of Justice and Attorney General, the Chief Justice and the Ghana Police Service can take the fairness and impartiality of the law as a criterion, crackdown on illegal acts and also give justice to business operators, and give confidence to investors in Ghana,” the letter which was copied to the Chief Justice, and the Inspector General of Police (IGP) stated.

The Police Headquarters had acted on a directive from the office of the Attorney-General and Minister of Justice to the IGP, directing the Western Regional Police Command on September 1, 2022, to withdraw the men at the factory but the directive is yet to be carried out.

A wireless message signed by the Director General, Police Legal and Prosecutions, Commissioner of Police (COP) Nathan Kofi Boakye said, “ The Office of the Attorney General and Ministry of Justice has written to the Police Administration that the ex-parte order obtained at the High Court Commercial Division on 28th July 2022 has expired. Therefore, all the policemen deployed to the mining company consequent upon the order should be withdrawn immediately to avoid contempt proceedings against the police administration.”

On August 21, 2022, the Attorney General, in a letter to the IGP titled, “ Re-Petition for Redress in the Matter of Wan Shanghong, Yang Liu vrs Big Stone Mining Limited and 6 others”, said the office had received a request to stop the continuous abuse of the petitioners’ rights.

Analysing the legal dimensions of the petition vis-a-vis the pending suit, the Attorney General said the police presence at the factory was purportedly for the execution of a  ruling on a civil suit by the High Court between the parties in the shareholding matter.

“Our examination of the ex-parte order dated 28th July 2022 discloses that the order was essential for the police to provide the applicants and the bailiff of the court with the necessary protection to peacefully serve the demand for interlocutory injunction and execute same.

“It is imperative to note that even though the ex-parte order mandated the police to assist the bailiffs to serve and execute the order, the execution itself ought to be done within the premises of the High Court (Civil Procedure) Rules 2004, C.I47.

The Attorney General further stated that “the police in terms  of the rules of court, are not permitted to be part of the execution process.”

“It is our opinion that if the allegations contained in the petition are true, the action of the police constitutes a clear infringement on the rights of the petitioners and an unjust interference in the administration of justice by the police service, “ the Attorney General’s letter signed by a Deputy Attorney General and Deputy Minister of Justice, Alfred Tuah-Yeboah said.

“This development has the potential to unnecessarily clear bring the police service into disrepute,” the Attorney General stated.

On that score, the Attorney General advised the IGP to take prompt action to withdraw the police from the mining site, warning that failure may lead to legal action against the state, which carried potential financial loss to the state.

Meanwhile, our investigations have revealed that Ms Wan Shanghong attempted to collude with the police to extend the ex-parte order, which was for 10 days, but that had hit the rocks.

Additionally, the aggrieved party had warned that they would not hesitate to mention the names of the “big people” who are behind the illegal occupation of the factory if the policemen failed to withdraw without any further delay 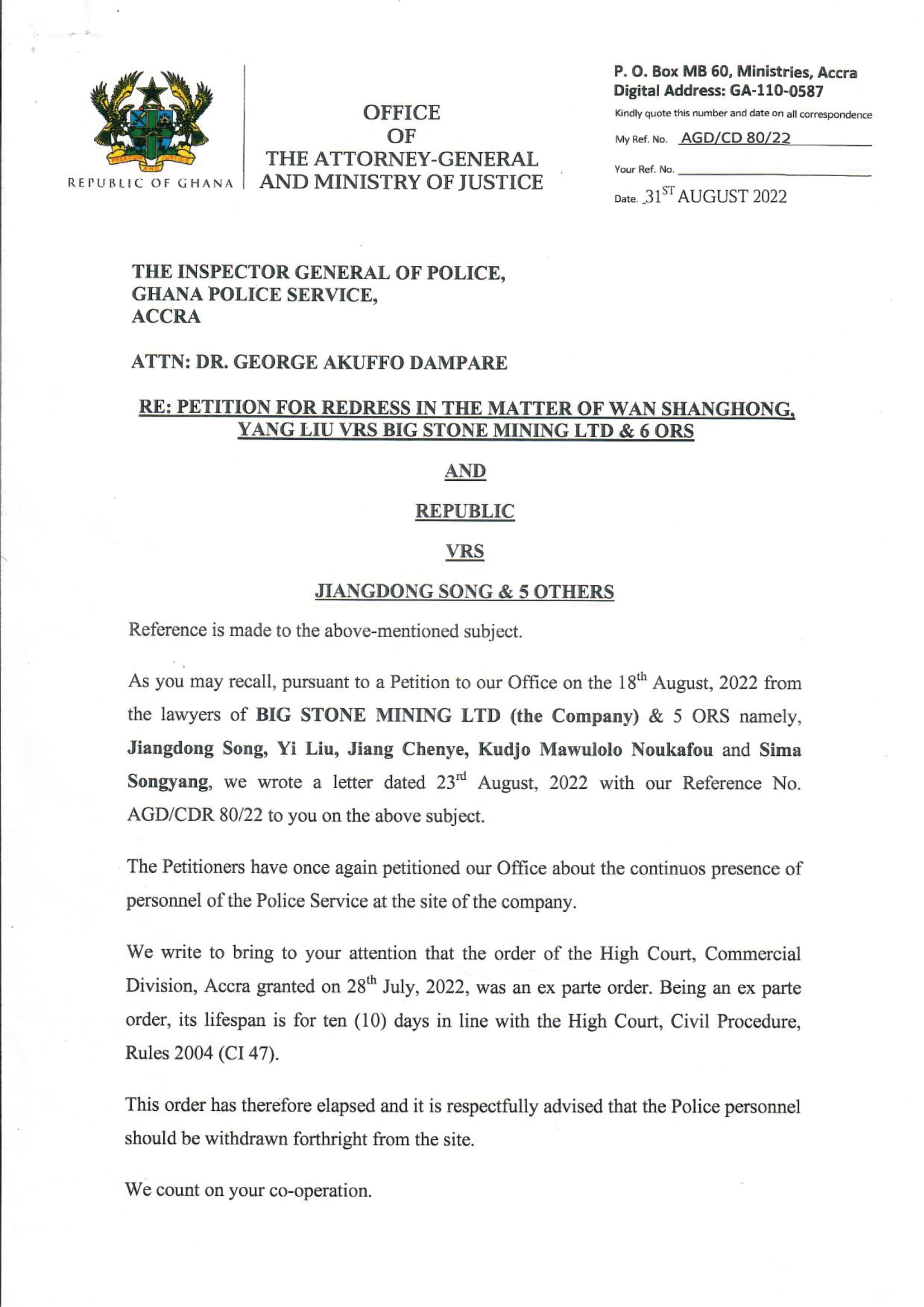