Amid the raging hair debate around Achimota School’s refusal to admit two Rastafarian students, a former colleague of actress Nadia Buari has disclosed how the actress lost her hair years ago in senior high school.

Tech entrepreneur Ethel Cofie posted on Twitter that young Buari cried till her nose was red as senior students cut her hair.

“lol remember that day they cut Nadia’s hair in Mfantsiman she cried till her nose was bright red and the seniors gleefully butchered her hair.

“till this day when i see Nadia in a movie i remember the crying and the red nose,” she added.

Ethel was reacting to a tweet by blogger Ameyaw Debrah in which he recounted how an Accra-​based private school Nadia attended had made an exception for her to keep her hair but Mfantsiman Senior High School insisted that she cut it.

It is a little over a week now since Achimota School denied admission to two students because they were wearing dreadlocks.

Authorities insist that school rules did not allow students to wear locks even as the beleaguered parents and students also insist that the rights to education of the students are being abused.

The issue received parliamentary attention on Thursday March 25 when MPs made submissions on the floor of the house.

Whiles a number of them chastised the school for denying the students a right to enrollment, others insisted that school rules needed to be enforced to the latter.

“Let us not through school rules introduce apartheid regime albeit via the backdoor. This is the reason I will condemn statements to the effect that Rastafarians should build their own schools… Tolerance and accepting unique identities at that age cannot be inimical in any educational system,” he said.

Nadia was born November 21, 1982 in Sekondi-​Takoradi, Ghana, to a Lebanese father and a Ghanaian mother. She attended Mfantsiman Girls’ Secondary School and then studied performing arts at the University of Ghana, graduating with a BFA degree. 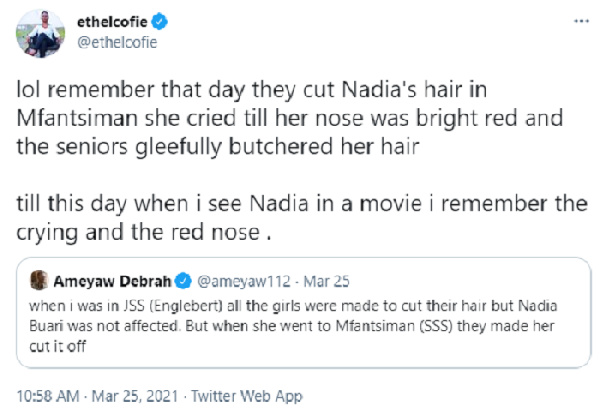 Court rejects McBrown’s request to have witness summons set aside