The Ghana Armed Forces (GAF) has unreservedly apologized to journalists and some other civilians who suffered military brutality during a protest at La in Accra. The military administration says it is gravely disturbed by the unfortunate incident and, as a matter of urgency, it has commenced investigations into the matter.

It, however, acknowledged that “reasonable force” used in restraining the protestors since the site for the demonstration houses vital military installations which, if destroyed, will negatively impact national security.

“In order to restrain the demonstrators, reasonable force had to be applied to remove them. Thus, in the process, some of the demonstrators or persons got injured. It later came to light that some of the injured persons were journalists who were there to cover the event.”

“GAF seizes this opportunity to apologize to the journalists and all innocent persons who might have been affected by the troops’ effort to clear the unruly demonstrators,” the Armed Forces said in a press statement.

According to GAF, steps will be taken to ensure that such an event does not recur going forward. “The Military High Command has directed that the case be investigated to ensure that such unfortunate incident does not occur in future. We once again call on all Ghanaians to follow due process in all their actions with GAF to avoid such unfortunate situations,” it added. 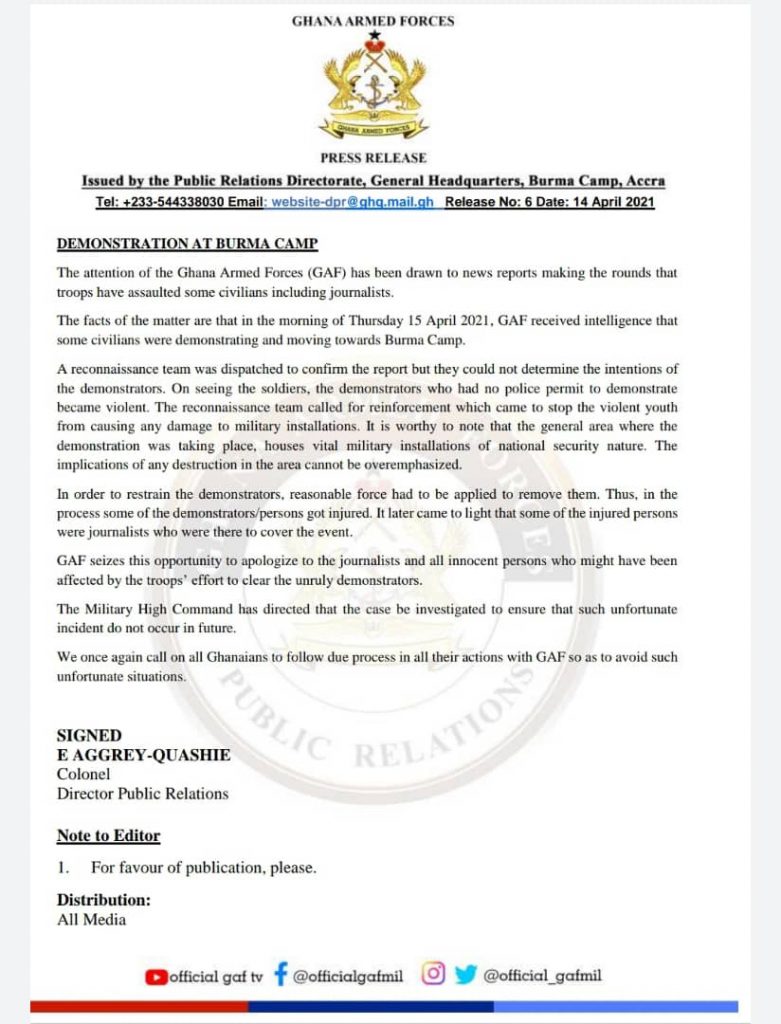 Military violence
Soldiers on Thursday, April 15, 2021 beat and chased away demonstrators protesting over the alleged encroachment of La Stool lands by the military.

Some of the media personnel who were there to cover the protest were also beaten and manhandled by some of the soldiers at the scene.

The group within the La Traditional Council, the Coalition of La Associations, defied orders of the police to suspend their intended demonstration.

Soldiers were seen dragging a protestor on the ground who was subsequently hit in the head. Some soldiers were also seen beating fleeing protestors with sticks. One soldier in a video is heard telling the media personnel not to take any photos.