The Ghana Institute of journalism is denying students access to both the Osu-Ringway campus and the new one at Dzorwulu. The students, who had gone to the school for lectures, were not allowed inside because the gates had been locked.

The decision according to security officers on duty is “an order from above.” There was also some police presence to ensure law and order.

It is unclear why the school authorities decided to lock out the students; but it is believed to be in connection with a planned demonstration against the school’s directive to all students who paid their fees after the registration deadline to defer their programmes.

This comes after the management of GIJ issued a communiqué on Tuesday Mach 23, 2021, directing all students “who paid their fees after the registration deadline to defer their programme.”
According to the communiqué, management took the decision “at its meeting held on Monday, March 22, 2021” a day into their revision week in preparation for their first semester exams.

Mr Daniel Machator, who is in charge of Public Affairs at GIJ, said the decision was taken following the expiration of the grace period it gave to defaulting students to pay a certain percentage of their fees. 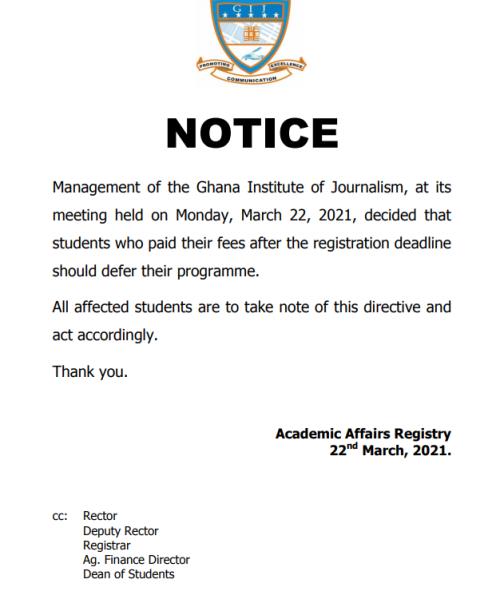 Atubiga next, after Allotey Jacobs suspension