President Joe Biden is big on equality and has spent much of his life fighting and campaigning for it.

Indeed, in his inauguration speech on January 20, he reminded us that the American dream is predicated on the belief ‘that we are all created equal’.

But he did so with this sobering caveat: ‘Our history has been a constant struggle between the American ideal, that we are all created equal, and the harsh, ugly reality that racism, nativism, and fear have torn us apart. The battle is perennial and victory is never secure. Through civil war, the Great Depression, world war, 9/11, through struggle, sacrifice, and setback, our better angels have always prevailed. In each of our moments enough of us have come together to carry all of us forward, and we can do that now.’

I was very moved when he said this, and I believed his commitment to equality for all was entirely sincere.

But now I wonder if President Biden even understands what the word means?

According to the dictionary, it is defined as ‘the state of being equal, especially in status, rights, or opportunities’.

Scroll down for video

By that criteria, I believe in equality and I’m sure Joe Biden would say this is what he believes it to mean too.

That’s the point we’ve reached in the battle for trans rights and in the process a new destructive inequality against women’s rights is being directly fuelled by President Biden.

Let me be very clear for those already charging to have me summarily cancelled for my ‘transphobia’: I support the right of all trans people to be treated equally in every way and have loudly said so for many years.

Yet that is exactly what’s happening. 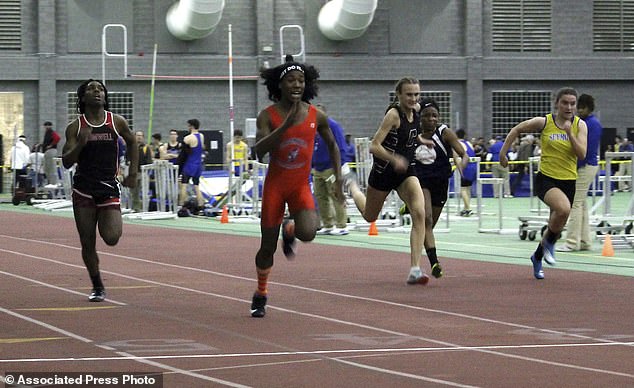 One of the first things Biden did after taking office was sign Executive Order 13988 which demands that measures be taken to ‘prevent and combat discrimination on the basis of gender identity or sexual orientation.’

This sounds perfectly reasonable until you get into the weeds of the order and discover that among various recommendations, it seeks to allow transgender athletes to compete according to their gender identity, as opposed to their biological sex.

Specifically, it says that transgender women who have gone through male puberty should be able to compete in women’s sports.

This, I’m afraid, is utter madness.

Again, this is not me being ‘transphobic’, it’s me stating an obvious fact.

That’s why we have gender-specific competition in almost every sport and events like the Olympics.

Put bluntly: Serena Williams is the greatest female tennis player ever but would be beaten by any of the Top 1000 men’s players.

And if this new presidential endorsement of trans women’s rights to compete in women’s sport becomes the accepted norm, then women’s sport as we know it in America will be destroyed.

The problem is so obvious, I can’t believe it actually has to be spelled out again. But sadly, it does.

And it’s vital that it is.

Tennis legend Martina Navratilova, a gay woman and one of the world’s most vociferous LGBTQ campaigners, articulated all the issues perfectly in a newspaper op-ed two years ago.

She explained, respectfully, how trans women born to male biological bodies have a large physical advantage: ‘Hundreds of athletes who have changed gender by declaration and limited hormone treatment have already achieved honours as women that were beyond their capabilities as men, especially in sports in which power rather than skill is paramount. But simply reducing hormone levels — the prescription most sports have adopted — does not solve the problem. A man builds up muscle and bone density, as well as a greater number of oxygen-carrying red blood cells, from childhood. Training increases the discrepancy. Indeed, if a male were to change gender in such a way as to eliminate any accumulated advantage, he would have to begin hormone treatment before puberty. For me, that is unthinkable.’

Then she warned of another more cynical potential consequence: ‘A man can decide to be female, take hormones if required by whatever sporting organisation is concerned, win everything in sight and perhaps earn a fortune, and then reverse his decision and go back to making babies if he so desires. It’s insane and it’s cheating. I am happy to address a transgender woman in whatever form she prefers, but I would not be happy to compete against her. It would not be fair.’

Of course, Navratilova was absolutely right about all of this including the likelihood of the final grim scenario happening.

Cheating in sport for huge financial gain has never been more rampant.

But for pointing out the bleeding obvious, Navratilova was shamed, vilified, cancelled by various official bodies who accused her of ‘perpetuating dangerous myths’, and convicted of being ‘transphobic’ by the court of social media.

All of which just showed how dangerously deluded and absurd this debate has become.

Now, President Biden has poured a whole heap of fuel onto the already raging fires.

And once more, Martina Navratilova is courageously putting her neck on the line to safeguard women’s sport.

She has formed a coalition, The Women’s Sports Policy Working Group, designed to promote what it termed an ethical, science-based approach to address the ‘vitriolic’ public debate.

The group argues that trans girls and women who have never experienced male puberty or ‘mitigated their sex-linked advantages’ should be fully included in women’s sport, but those trans women who’ve gone through puberty as males should be barred from competing against women who haven’t.

This seems an entirely sensible and rational compromise to me.

Navratilova reaffirmed that she has a ‘long history of advocating for women’s and LGBTQ rights’ but added: ‘In sport, however, advocating for women’s rights means talking sex and sex-linked biology. The performance gap between male athletes and female athletes emerges from the onset of male puberty, and from that point forward even second-tier males can beat the very best females.’

And there, surely, is the proverbial nail on the head of this debate?

What can possibly be ‘equal’ about a system that allows mediocre athletes in men’s sport to switch genders, without any requirement for surgery to change sex, and instantly become world-beating athletes in women’s sport – as we’ve been seeing more and more in things like sprinting, weight-lifting and cycling?

How does that do anything but create a new inequality and discrimination against women born to female biological bodies?

Yet that is what Joe Biden wants to let happen.

Yesterday, his administration announced it was rescinding support given under the Trump administration for a lawsuit aimed at preventing transgender athletes from competing in girls’ high school sports.

It was filed by three young female athletes who believe their ability to compete has been unfairly damaged by trans women competing against them.

One of them, Alanna Smith, said: ‘People should realize that a lot of biological females have missed out on making it to meets that really matter like states and regionals and the transgender athletes have taken spots on the podium that belong to biological females. We train for so many days a week, so many hours to be the best in our state and the best in our region and these biological males are just taking it away from us and we really deserve it.’

These girls deserve fairness and equality too, don’t they?

The bottom line is this: trans women should be free to play competitive sport.

Whether that means they compete against each other or against men born to the same biological bodies is a matter for serious debate.

Everybody knows this, but very few people in authority seem prepared to say so for fear they will be the next for the trans lobby cancel culture chopping block.

That’s why I salute Martina Navratilova who has fought so hard for equality all her life, including for trans people, and sees the inherent inequality that Biden’s executive order represents.

She also knows that this furore will only serve to further alienate trans people rather than win much-needed support from non-trans people.

If Biden truly believes in the American dream that everyone is equal then he needs to stand up to the ultra-woke hard-left progressive elements of his party forcing through this obviously unfair agenda and defend the right of women not to see their sport demolished at the altar of political correctness.

#GhVetting: I’ll be minister for all sports, not just football – Mustapha Ussif

Prof Kwesi Yankah recounts beauty, splendor of Birim River in the past