Ghanaian YouTuber Kwadwo Sheldon appears to have taken a swipe at Sarkodie following some pictures the rapper uploaded on social media.

In the pictures, the rapper who is currently in the United Kingdom was spotted posing with shoeboxes from popular sportswear maker Nike.

Sheldon believes that Sarkodie is too big an artsite to be posing with shoe boxes in pictures. It is a “bottom tier” behaviour especially coming from a musician of his calibre.

“Nothing funnier than Sark posing with Nike boxes..Lmao bro what’s the point. This is bottom tier behaviour but okay,” he tweeted. 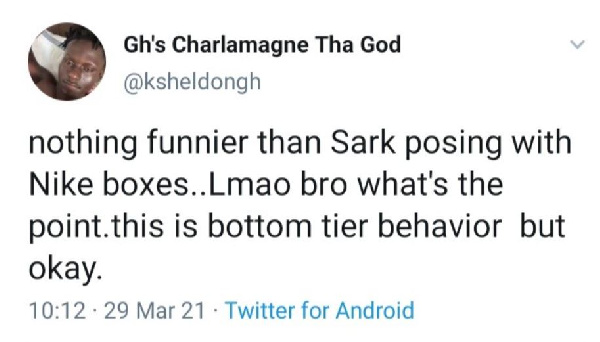 No label can compare to Zylofon – Obibini