The Ghana Pentecostal and Charismatic Council (GPCC) is demanding for the immediate arrest and prosecution of persons behind the new Lesbians, Gays, Bisexuals, Transgender and Queer Intersex (LGBTQI) community office in the country.

It also wants all diplomats who allegedly took part in the opening of the LGBTQI office in Ghana to be summoned to explain their actions since Ghana’s laws frown on such activities.

A statement issued and signed by the president of GPCC Rev Prof Paul Frimpong-Manso said the government must not yield to endorsing the activities of LGBTQI because it is a potential threat to peace.

Below is the full statement 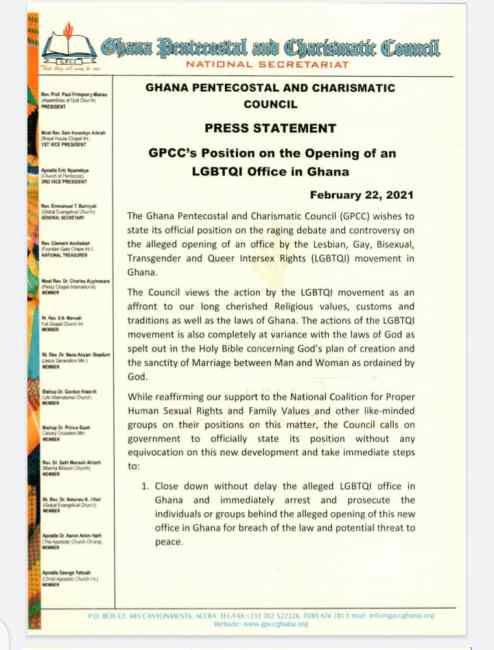 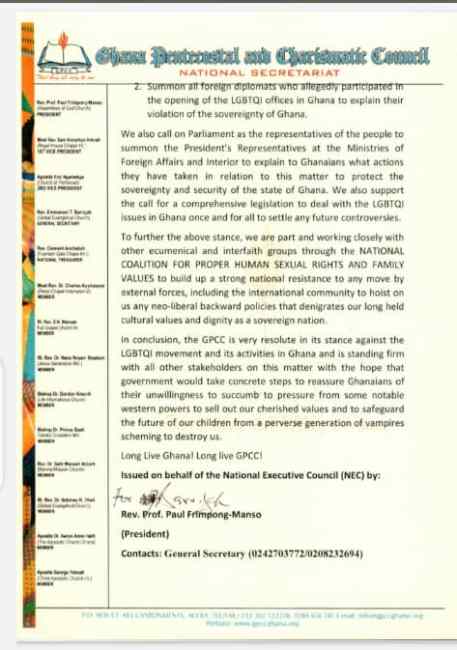 Meanwhile, the Ghana Catholic Bishops’ Conference has also called for the immediate closure of the newly opened community center for LGBTQI campaigners in Accra.

It further advised the executive and legislative arms of government not to yield to any pressure to legalize the rights of lesbians, gays, bisexuals, or transgender people in Ghana.

A statement issued by the Catholic Bishops’ Conference and signed by its president, Most Reverend Philip Naameh, said although the Church condemns the practice of homosexuality, it believes that gay people should not be subjected to any harassment simply because of their sexual preference.

On Wednesday the European Union in Ghana commended the country for respecting the rights of LGBT people.

It further pledged support for civil society groups that will promote the rights of homosexuals in Ghana.

The EU statement has provoked a backlash by the public. Many Ghanaians have called for the closure of the newly opened LGBT office in the capital, Accra.