TV3 Network, Ghana’s number television station has announced Sunday 25th April 2021 as the grand finale for this year’s edition of its children’s talent show, Talented Kidz. The show will be telecast live on TV3 and on Facebook (@tv3Ghana) at exactly 3 pm. Ahead of the night expected to witness electrical performances, meet the six finalists!

Blessing Alorvor is a blessing on the stage. Her talent has never been questioned since she auditioned in Takoradi and blew the Judges away. Her melodious voice, charisma, infectious smile, and consistency has elevated her to this level. Blessing is not resting on her oars and is ready to take the ultimate title back to Takoradi. If you feel that she is carrying a huge burden to win the ultimate, then come again, because her mantra is ‘Takoradifuor yen suro pressure’’.

Akwaada Nyame, the cute and adorable boy from Kumasi has been dazzling both judges and fans of the show with his silky voice since day one. Akwaada Nyame is a real definition of a prodigy. He has exhibited various higher levels of stagecraft throughout the weeks, tells stories with uncompromised honesty and emotions, moving the judges to tears. Akwaada Nyame’s talent is beyond his years; you belittle him at your own peril. He is hoping to dab to the title.

Spike G – A genuine MC from Ashaiman, a suburb that has produced many great talents in the country. Spike G is on the right path to becoming the next big thing. Throughout the competition, he has exhibited different sets of skills that make him stand out as a unique talent. A genuine MC cut in the cloth of old school rappers, Spike G is slick on the Mic, has an amazing confidence on stage, and knows how to wow the audience and judges.

Spike G is leaving no stone unturned. He is ready to stake his claim and be counted. Watch out.

Rap Krachie — He’s got the swag, the style and class. This young talented rapper has been holding high the Kumerican Flag since he scaleded the auditions to become one of the most entertaining acts in this year’s competition. His flow on the beats, his rhymes, his lyrics are exceptional.

The judges couldn’t stop singing his praises, the audience couldn’t have enough of his unique rap skills and each week he brings his A game on board. Rap Krachie has become a force to reckon with in the competition and he brings his no-​hold-​barrier punchlines to annex the ultimate prize.

Saliha De Poet – She came on as a shy-​looking reserved lady who was just passionate to explore her talent in poetry. Over the weeks the shyness faded away, her sense of purpose took over and now Saliha has transformed into a powerful and profoundly gifted poet who, weeks upon weeks, has dished out superfluous words and treated audience and the judges to various subject matters.

She has touched hearts, turned imaginations, and taken audience on a journey that is beyond their wildest dreams. She has showcased memorable performances and is ready to take it a notch higher in the finals. Don’t blink and miss a word. She is ready to surprise, awake you and stir your emotions as she battles for the crown.

Andy Dabo – It was during the Kumasi auditions that this cute boy with a bundle of energy announced himself to the world with his dance moves and dexterity. He has never looked back since. Andy has over the season performed to the judges like a season Pro. No wonder he has been receiving plaudits from the judges and wider acclaim from the audience and viewers at home. Each week, he takes his performance a stake higher with some daring and risky moves.

He has however scaled through all hurdles and overcame all challenges thrown at him. The final can be a huge task but not to Andy Dabo. So what should we expect from him? Catwalk in the skies? Well, be ready because Andy has a lot under his sleeve to amaze you.

Who wins the night? 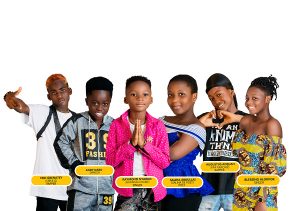 Gyakie and Yaw Tog to release a song when school breaks