Information Minister, Kojo Oppong Nkrumah has been named the Best Performing Minister in 2020 in an online poll conducted by GhanaWeb.

He emerged with the highest votes out of a group of four Ministers listed for the poll. They included the Education Minister Dr. Matthew Opoku Prempeh, Deputy Health Minister Dr. Bernard Okoe-Boye, Trade, and Industry Minister, Alan Kyeremanten.

While his closest contender, Alan Kyeremanten emerged with 3,625 representing 33.69%.

It is worth noting that the Information Minister has played quite a paramount role in the government’s business this year. Kojo Oppong Nkrumah has never left the news headlines ever since Ghana recorded the first cases of the Novel Coronavirus.

As per the demands of his outfit, he consistently led press conferences that were targeted at detailing the minute intricacies of the virus and its effects on the country’s economy.

He was heavily lauded for his pragmatic and proactive approach in handling his work during the period.

By June 2020, Oppong Nkrumah was listed among the top 10 best performing Ministers in the Akufo-Addo administration by a survey conducted by the Political Science Department of the University of Ghana.

Oppong Nkrumah was selected as one of 115 leaders by the World Economic Forum in their latest World’s Most Promising Leaders under the age of 40.

Below is the full result of GhanaWeb’s polls; 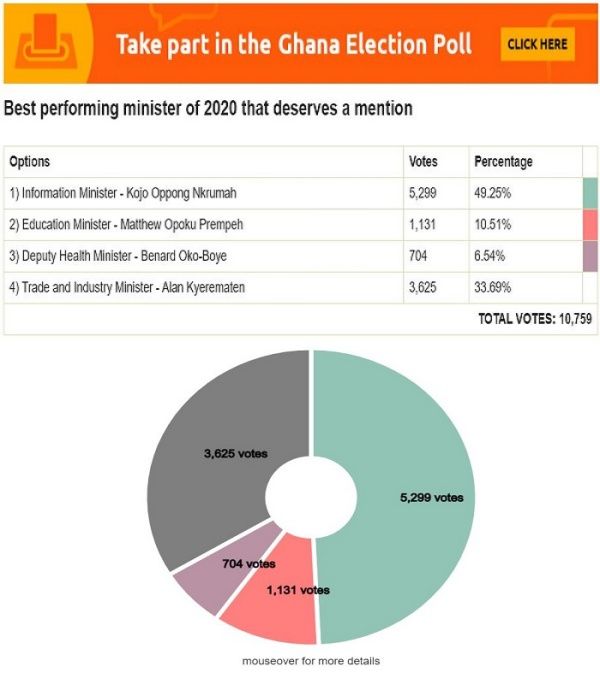 Efforts at having a well-structured money market on course – Gov't

COVID-19 pandemic is 'not necessarily the big one,' a more deadly pandemic could sweep the globe - WHO warns