The Ghana Medical Association (GMA) has called on the government to restrict the number of persons attending the funeral of the former president, Jerry John Rawlings, and instead encourage television monitoring.

The burial service of the late President started yesterday, Sunday, with a requiem mass at the Adabraka Holy Spirit Cathedral.

The body of the first president of Ghana’s 4th Republic is currently lying-in-state at the Accra International Conference Centre to afford dignitaries and other heads of state the opportunity to file past.

A number of activities will be held prior to his burial on Wednesday, January 27, 2021.

But according to the GMA, such activities should be restricted due to the upsurge of COVID-19 infections in Ghana.

“Government should restrict the number of persons attending the state funeral for the late H.E. Flt. Lt. Jerry John Rawlings and rather encourage people to follow proceedings on television and other social media platforms.”

Meanwhile, it also added “Government should as a matter of urgency restrict social activities such as parties, church services, funerals, clubs and other social gatherings of such nature.

“The markets should be regulated and as much as possible restricted.” 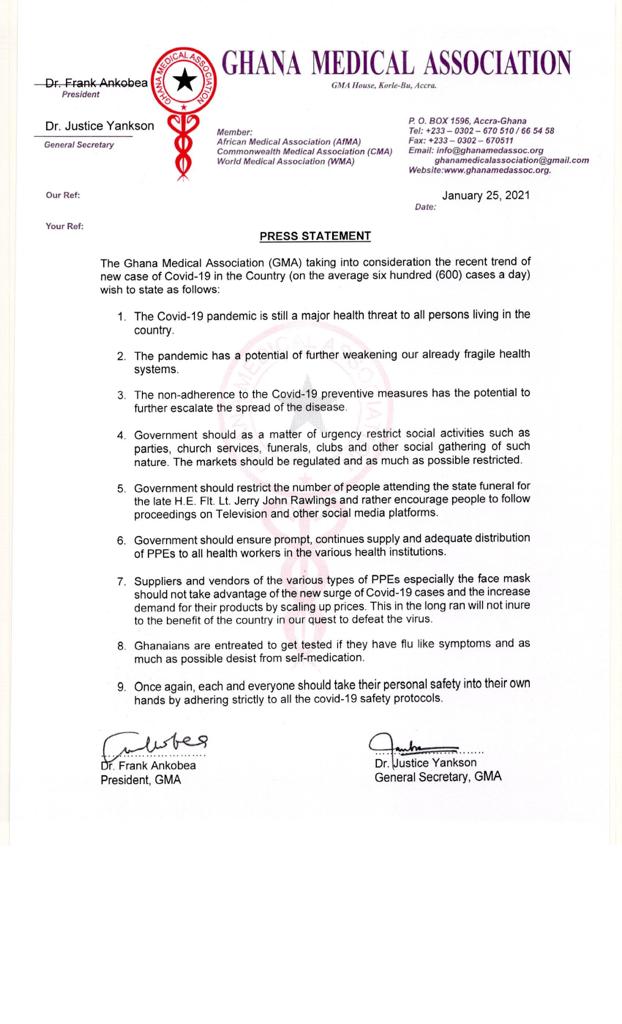 Ghana is currently experiencing a third wave of COVID-19 infections.

The country has over 3,000 active cases as of the late update by the Ghana Health Service (GHS).

This has led to an over stretch of the health facilities in the country.

The Greater Accra, Ashanti, Central and Western regions are leading with high number of the active cases.

COVID-19: GHS calls for adherence to protocols as admissions go up