Police in China and South Africa have seized thousands of doses of counterfeit Covid-19 vaccine and made dozens of arrests, Interpol says.

In China, police made 80 arrests at a factory allegedly making the fake vaccines, where at least 3,000 doses were found.

Three Chinese nationals and a Zambian were detained at a warehouse in Gauteng, South Africa, where ampoules containing 2,400 doses were discovered.

It is not clear when exactly the arrests took place.

The discovery in South Africa was reported by the country’s Sunday Times newspaper at the end of December.

In Wednesday’s statement, Interpol said it was also getting reports of other fake vaccine rings.

Interpol, short for the International Criminal Police Organization, is based in Lyon, France, and facilitates international co-operation between police forces and crime control.

The Covid-19 pandemic has claimed more than 2.5 million lives worldwide and infected nearly 115 million people, according to a Johns Hopkins University estimate. 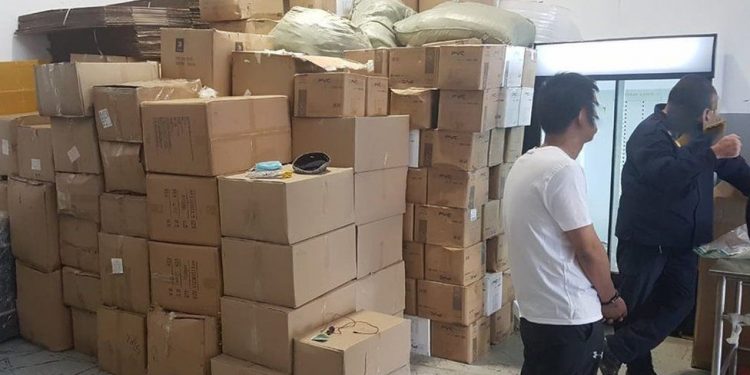 Announcing the dismantling of the suspected fake vaccine network, Interpol stressed that no approved vaccines were “currently available for sale online”.

“Any vaccine being advertised on websites or the dark web, will not be legitimate, will not have been tested, and may be dangerous,” it said

Vaccines are a vital tool for overcoming the pandemic and competition is fierce worldwide to buy up available doses following the approval of a growing number of products by medical authorities in recent months.

What exactly did police uncover?

In Germiston, Gauteng, police found about 400 vials – the equivalent of around 2,400 doses – of the fake vaccine as well as a “large quantity” of fake 3M masks, Interpol said.

It released images of boxes and packages in the warehouse.

South Africa only started vaccinating its population on 17 February after concerns over the efficacy of vaccines against a new variant of Covid-19.

No location or further details were given for the counterfeit factory in China which was, Interpol said, investigated with the help of its Illicit Goods and Global Health Programme.

A spokesperson for the Chinese ministry of public security said police there were conducting a “targeted campaign to prevent and crackdown on crimes related to vaccines” and would step up constructive co-operation with Interpol and police in other countries to effectively prevent such crimes.

How big is the problem of fake vaccines?

Interpol Secretary General Jürgen Stock said that while the police operations in China and South Africa were welcome, this was “only the tip of the iceberg” when it came to Covid-19 vaccine-related crime.

In December, the organization issued a global alert warning police in its 194 member countries to prepare for organized crime networks targeting Covid-19 vaccines and gave advice about how to spot fake medical products.

Last month, China arrested the leader of a multi-million dollar scam that passed off the saline solution and mineral water as Covid-19 vaccines.

The suspect, identified only as Kong, had researched the packaging designs of real vaccines before making more than 58,000 of his own doses. He was among 70 people arrested for similar crimes.

According to a court ruling, Kong and his team had made a profit of 18m yuan ($2.78m; £2m) by putting saline solution or mineral water in syringes and hawking them as Covid vaccines.

A batch of the fake vaccines was smuggled overseas but it was not known at the time where they had been sent to.

The suspects are said to have offered vaccines for sale for the equivalent of around $2,000 per dose at a clinic in a suburb of Monterrey.

At least 20 die as migrants thrown into sea off Djibouti