Ghanaian dancehall king, Shatta Wale has been in the U.S for some time now.

Shatta flew to the United State after the Grammy’s ended on a sour note for him.

As part of measures taking to hit the global market and to bolden his chances for a grammy title, Shatta Wale scheduled to have concert in Washington DC, Marryland and Virginia last Saturday, April 3rd but it didn’t happen.

According to Shatta Wale, the show didn’t come on because the police stopped the show after a massive crowd violated COVID protocols to come and witness the show.

However, new gist coming up is that Shatta Wale was forced to cancel the show because the number recorded wasn’t impressive and he couldn’t afford to have the concert with the low turnout.

He would have incurred debt.

Check out the screenshot below; 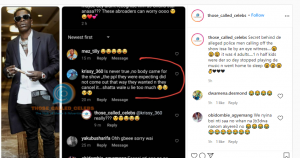 ‘I Didn’t Rape Any 17-Year-Old Girl, She Approached Me’ – Shatta Bandle Reacts To Viral Video – Watch

R2Bees, King Promise, Gyakie, and others for Wizkid Live Concert in Ghana