The Vice-President, Dr Mahamudu Bawumia, has expressed his dissatisfaction with the slow pace of work of the Agenda 111 hospital project in Paga in the Kassena-Nankana West District in the Upper East Region.

“I wish I could say I am happy with the progress of work done so far; unfortunately, progress of work is unsatisfactory. I’m deeply concerned that this site is not moving at the pace that it should be moving and we have to say it as it is,” he said.

The project, which started in February 2022 and is being executed by Akofix Engineering and Citi Entrepreneurs, is still at the foundation level.

Some worried residents said the contractors had not been on site for the past six months and only resurfaced on hearing of the Vice-President’s visit to the project site.

As part of his tour, Dr Bawumia visited the hospital project site and also paid a courtesy call on the Paga-Pio, Pe Charles Awiah Awampaga II, and his elders at his palace.

He also held separate in-camera meetings with NPP executives, elders and supporters at the C.K. Tedam University of Technology and Applied Sciences (CKT-UTAS) and the Bolgatanga Technical University (BTU).

The Vice-President was accompanied by the Minister of Defence, Dominic Nitiwul; the Minister of the Interior, Ambrose Dery; the Minister of Youth and Sports, Mustapha Ussif; the Presidential Advisor on Health, Dr Anthony Nsiah-Asare; the Upper East Regional Minister, Stephen Yakubu, among other dignitaries.

“We need to be making more progress than what I have seen and we want to encourage all the contractors to get to work and get the project on schedule because we are behind schedule.

“We are going to have a meeting with all the contractors executing all the projects to ensure that the projects are completed ahead of the agreed schedule,” Dr Bawumia said. 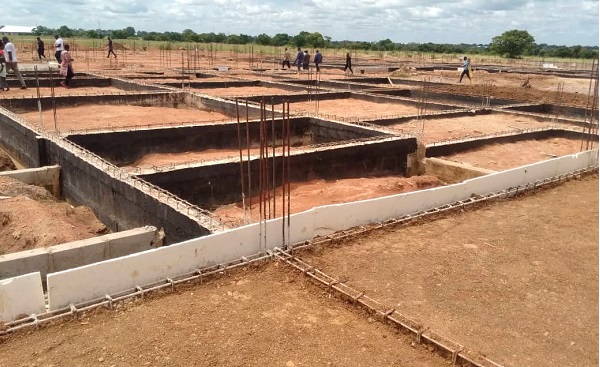 Explaining that the aim of the Agenda 111 policy was to take a very holistic approach towards tackling the lack of health facilities in some districts across the country, he stressed that over 90 districts did not have hospitals, which was why President Akufo-Addo took the bold decision to address that issue once and for all through the policy.
“This is why the government is undertaking the construction of 111 hospitals nationwide to bring healthcare services closer to the people,” he said.

Earlier, Dr Bawumia had been welcomed by some enthusiastic NPP supporters, amid cheers, dancing and singing, at the Paga-Pio’s palace.

Speaking through a spokesperson during the courtesy call on him, Pe Awampaga commended the government for the numerous developmental projects executed in the area.

He particularly mentioned the Paga Border transit park, the Agenda 111 hospital project, the construction of many school buildings, as well as the provision of potable water for communities that hitherto faced water challenges.

“We are highly impressed by all that the government has been able to execute across the district and throughout the entire region for the benefit of the people,” he said.

He appealed for the construction of a new girls’ dormitory for the Paga Senior High School, saying after the previous one got burnt, the girls had been compelled to rent apartments in town to attend school.

“The current situation has exposed the girls to men, who take advantage of them sexually, leading to teenage pregnancy,” the Paga-Pio said, adding: “His Excellency, we are on our knees and plead with you to come to the aid of the school to address this pressing challenge.”

He further appealed for the reconstruction of the bridge that links Paga to Navio and other communities which got damaged a few months ago, saying: “We urgently need this bridge to enhance economic activities on that stretch, as well as enable farmers to cart their farm produce to the market.”

Additionally, Pe Awampaga appealed for the construction of a six-unit classroom block for the English-Arabic Basic School in Paga to enhance teaching and learning.

In response, Dr Bawumia said he would engage the Ministry of Education and the Ghana Education Trust Fund (GETFund) to find ways of addressing the issue of the burnt girls’ dormitory.

He assured the people of Paga that the government would seriously look at the concerns that they had raised and address them, as it had done in the execution of other projects in the area.

“This tour is a follow-up and meant to touch base in areas where President Akufo-Addo was unable to visit during his recent tour of the five northern regions,” the Vice- President said.